Anyone can get fit

Anyone can get fit

I had a client who was diagnosed with pre onset osteoarthritis. According to his doctor he was on his way to being in a wheelchair. When I met him I quickly realized that his main problem wasn’t pain, but muscle weakness. He struggled to lift himself out of his chair and battled with everyday tasks such as walking up stairs and even getting out of bed. He wasn’t what one would call morbidly obese however he had a large mid-section and led a very decadent lifestyle. James (not his real name) suffered terribly even though he was barely 50 years of age. When he asked if I could help him my reply was, “If you can put in the effort James”. We agreed that he would start slowly and begin light exercise. Every day I would arrive at his house and he would be up and ready, anxious to change his life for the better. On the first day of training I made him put a chair in the middle of his home-gym.

“But I have all this equipment” said James. “What do you need a chair for?” “Sit down on the chair James, you will see soon enough”Obediently James took a seat. “Please stand up for me James.”

He put his hands on the arm-rests and pushed himself up out of the chair, contorting his face. It took him 8 full seconds to get up from the seated position. For most people, it doesn’t take more than a second or 2 to perform a minor action like this – maybe even 5 seconds – but not 8. Once he was standing he wiped his brow and smiled at me. “Right I’m up, what now?” Said James.

“Now you need to sit back down, but before you do I want you to keep your feet shoulder width apart.”

James moved his feet into the position that I asked him to and sat back down on the chair. This carried on for 20 minutes – up and down, up and down – until James couldn’t carry on.

After a week of performing the same exercise I made things a bit more challenging and replaced the chair with a large exercise ball, no hand rest this time, James had to use his legs and his hips to perform the exercise. After four weeks of sitting and standing James was able to perform an unassisted squat. The little pain he had in his hips had dissipated and he was no longer embarrassed to stand up in front of people. 6 months later, James competed in his first triathlon. Today, James is an avid Iron-man competitor. 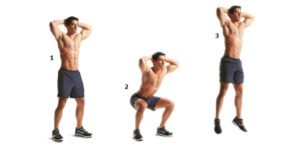